First things first; jet lag is not for the faint hearted. 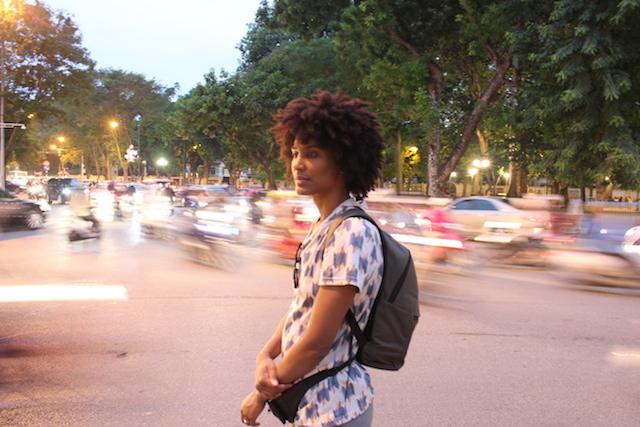 I had awoken at 7am this morning expecting my darling to rise and shine for the day so we could go and grab breakfast. I had originally said that I would consider going out for a morning jog by the Hoan Lake to get my cardio routine back into action and to boost my energy for the second day of our adventure.

Sure enough, it was good in theory. But in practice, my dear wife was in the twilight zone until midday and somehow I found myself lost into some bizarre corner of Youtube some three and a half hours later. Nonetheless, when we finally woke up, we managed to break free from the double bed and out onto the less than busy main streets of Hanoi to fulfil our first mission…breakfast!

Now something about Vietnamese cuisine that I learnt today is that the majority of meals consist of pork or shellfish. (A lesson I learnt the hard way, since I do not eat any of these). With my belly telling me one thing and my mind another, it was an intense struggle from within. On the other hand, we managed to find Stephanie a wide range of food. She started off with Vietnamese spring rolls. Her reaction can be seen below.

In search of the holy grail – Breakfast

We continued our search of ‘Dave’s mighty breakfast’ to kick start the day; with the hope of avoiding a beef pho all day, there must have been hope; one would have thought. And all I was seeking was some rice, beef or bread. Simple? No?

Steph took me down some side streets which led us past arrays of motorcycles and fashion shops. It seems like after one hour of food soul searching, I had got the exercise that I had originally planned for all along! 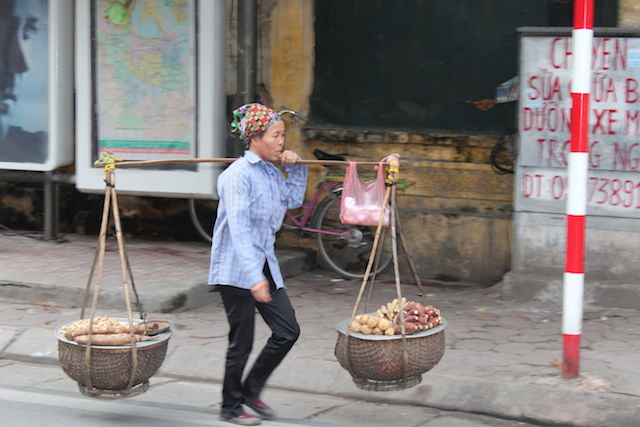 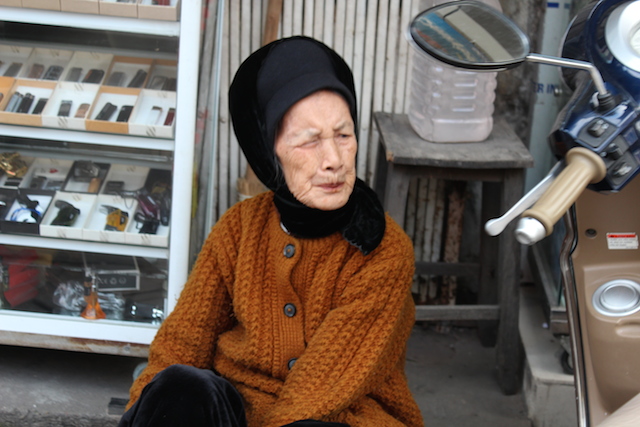 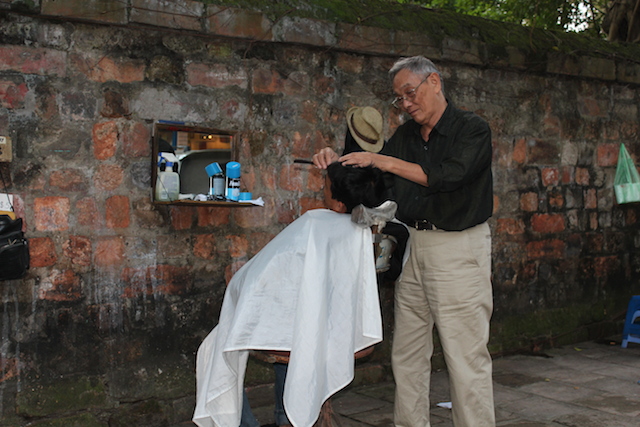 We agreed to go back to the hotel to find a recommended place by Lonely Planet; which led us to a place called Net Hue. It was tucked away behind a corner on the 3rd floor of what seemed to be a combination of flats and restaurants in one building. Nonetheless, my stomach was telling me to take a leap of faith and to go where a hungry man has gone before.

Now at the time of writing this, £1GBP is roughly equivalent to 30000 dong.

OH MY GOSH! The Fried banana and coconut milk hit me straight to my heart. This dessert went 0 to 100 real quick on my taste buds, and within 1/4 of a second, I knew this dessert had entered my all time top 10 desserts. I finished it in a minute. And had I not ordered any other food, I could have easily have eaten this all day. They say the key to a mans heart is through his stomach. (Steph: nudge nudge; wink wink!)

Meanwhile, Steph was enjoying herself with her Pho, and when the spring rolls came…her eyes rolled back like she was…er…on cloud nine :)

I’m sure she’d have classed it as being ‘heavenly.

It was 3pm by the time we finished breakfast, and we still had to go explore Hanoi before the attractions closed at 5pm. Fuelled by the power of Pho, we set off from the restaurant in search of The ‘Temple of Literature’, which was a few blocks west from where we had eaten. Navigating the roads in Vietnam is definitely different. The safe rule of crossing the road where you look left, look right and then look left again does not exist – I repeat ‘DOES NOT EXIST’.

Instead, you walk into the road and hope that you come out alive on the other side – TRUTH!

After a few close calls, we made it to the temple and Steph had an extra pep in her step from the buzz of navigating the cars like she was the female version of James Bond, and also attracting a mini fan club with the locals asking to take pictures with her at various locations. This happened quite frequently, as you can see below. 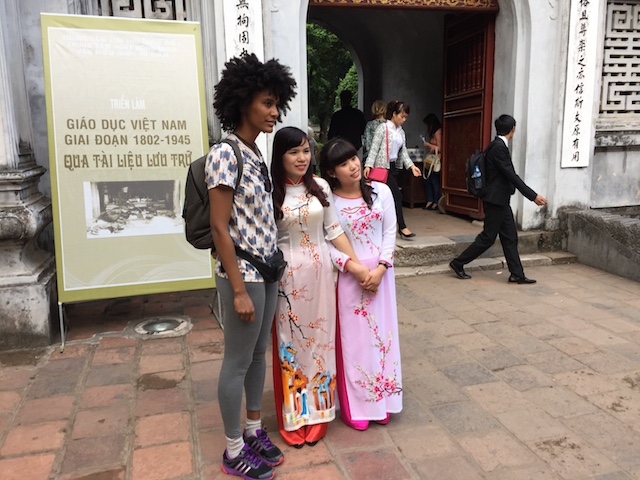 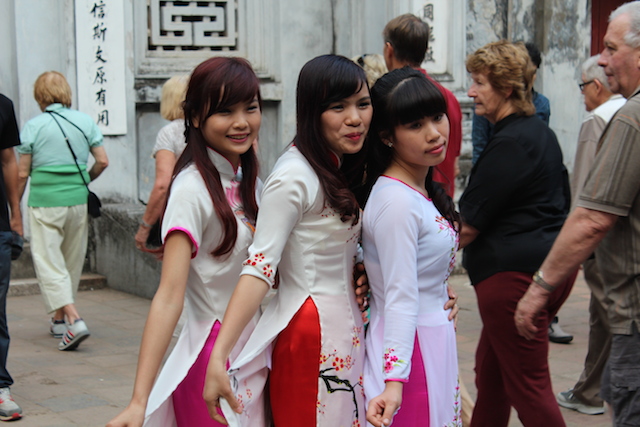 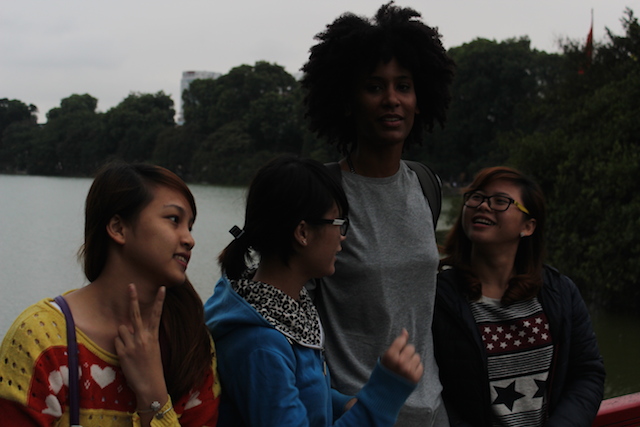 We were even called upon by a young Korean boy. Check out his facial expression when I started to speak Korean to him.
That’s right…My Gangnam Style :)

As we entered into the garden, we were bestowed with beauty. Steph was in awe as she had never seen something of this detail before. 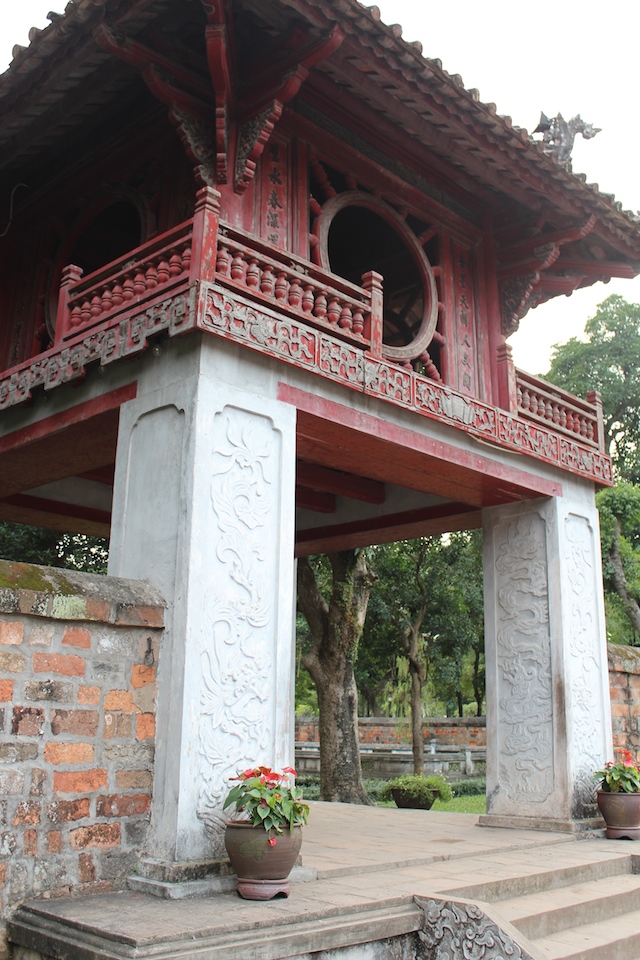 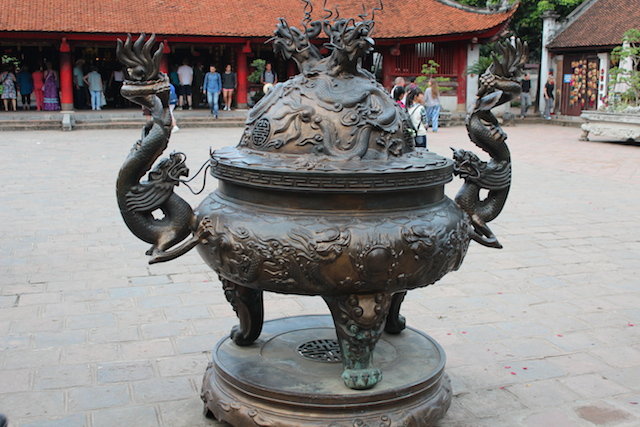 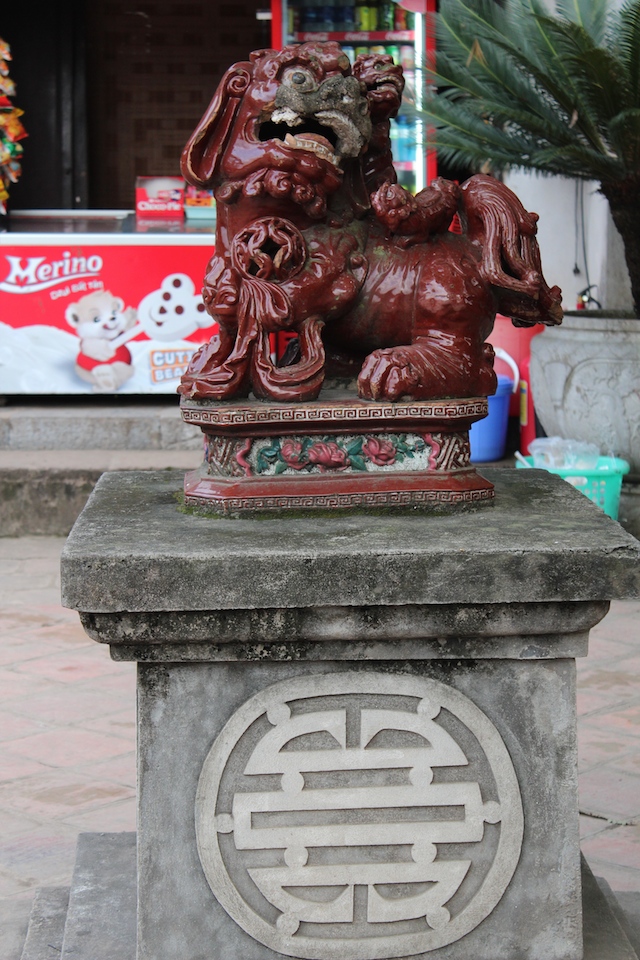 We were moved by what was in this garden. 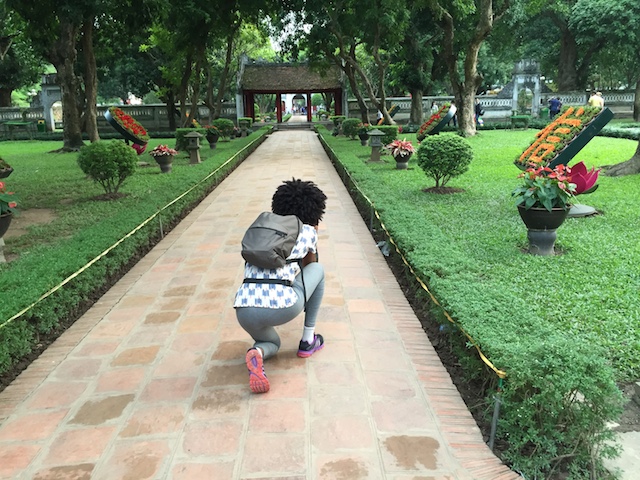 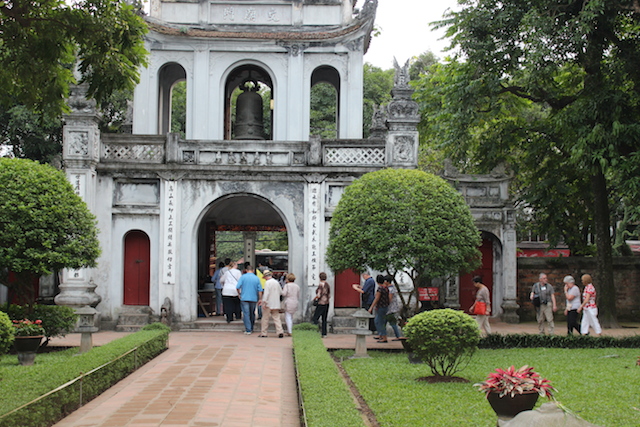 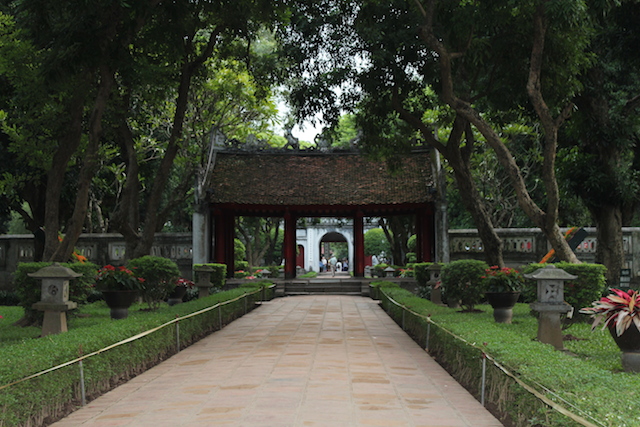 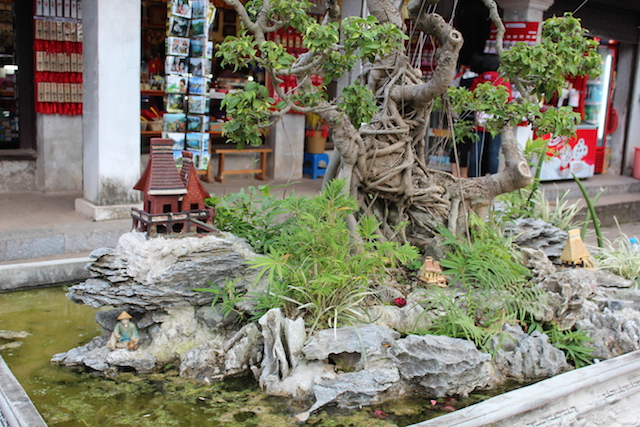 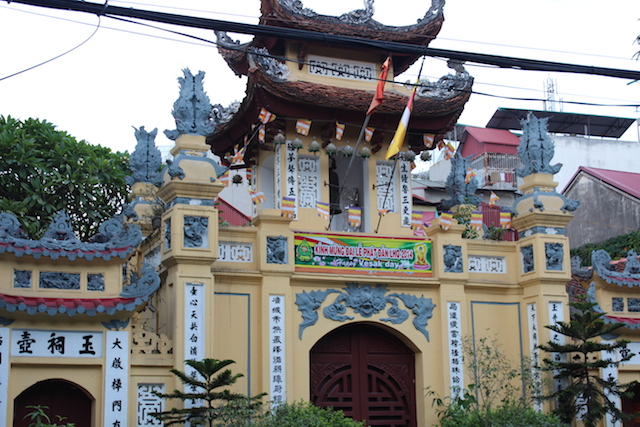 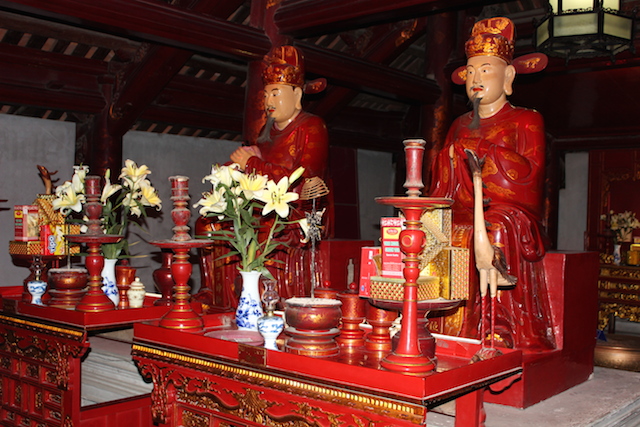 Upon leaving, we faced another Mission impossible challenge with crossing the road. 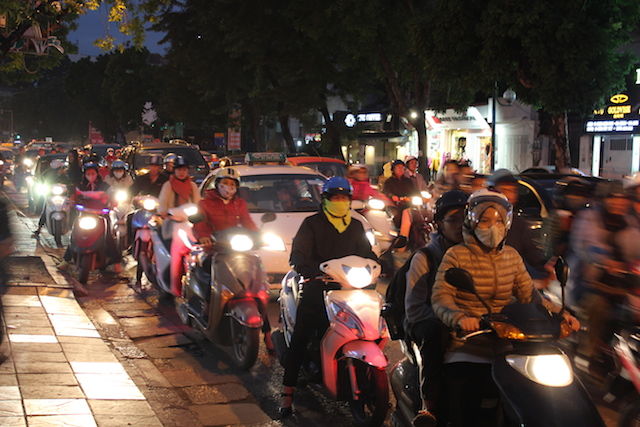 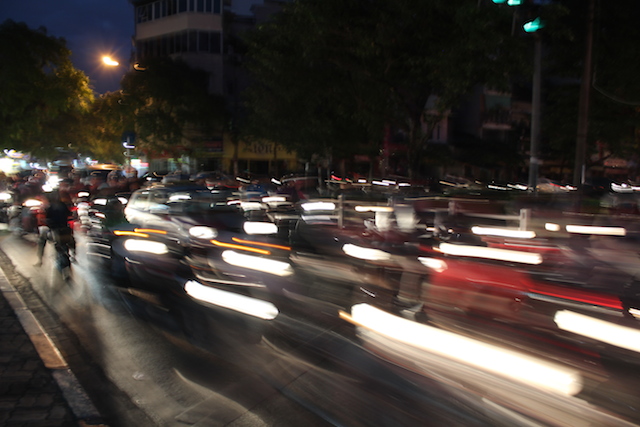 We walked around nearby and saw locals fishing in the lake, having haircuts on the side of the street and playing badminton. 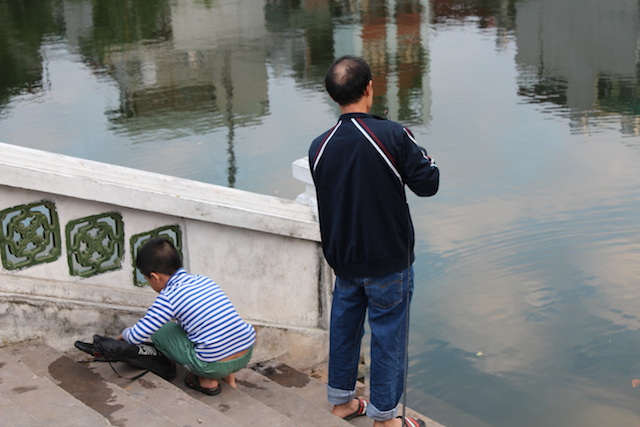 Further up into the square just past the Army Museum and close to the Hanoi Flag tower, we passed boys playing football and skateboarding in the square next to a statue of Lenin. (Link to wikipedia) 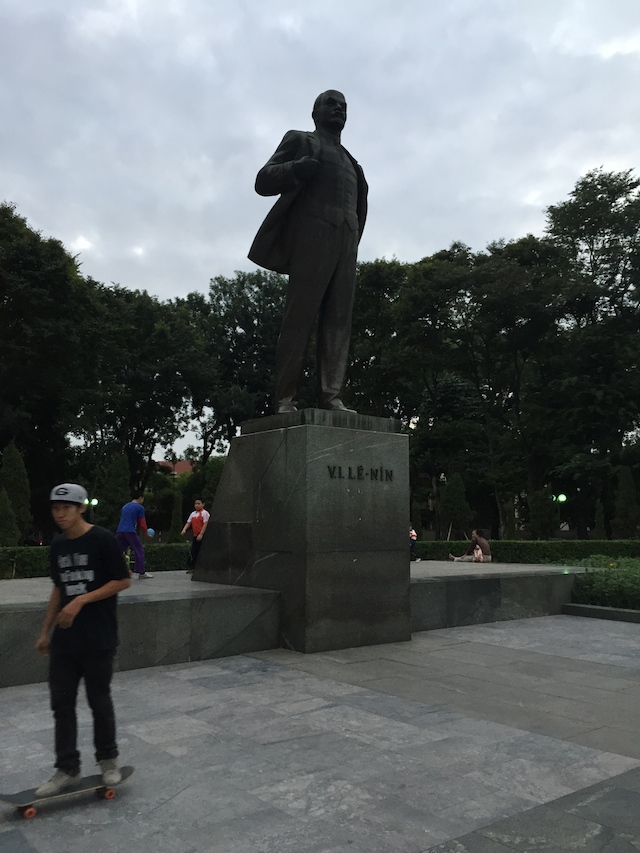 It was interesting to see the contrast of Communism integrated with today’s modern trends.

Moving on the road by dusk

We continued to walk around the town and make our way back to Hoan Lake. When we arrived, we decided to go and check out another place called Hanoi House; recommended by Lonely Planet next to St Joseph’s Church (Ironically, also the name of the place I went to school in Australia – St Joseph’s College Nudgee). 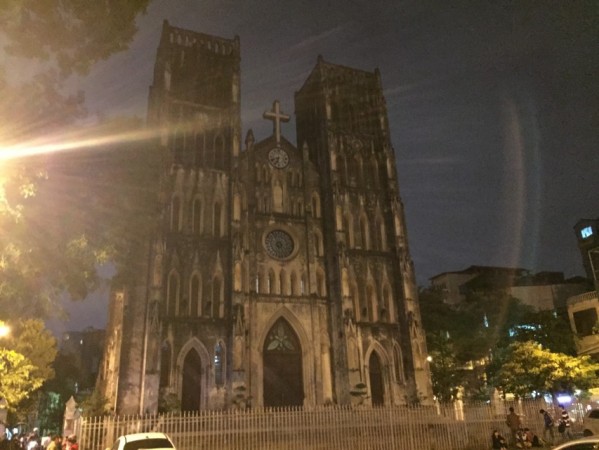 Just before we were about to set off, I had gone to the lake to capture a photo of the lake by dusk, when Steph was approached by a young Vietnamese girl who asked if she could practice English with her. And in turn, she ended up teaching Steph a few words in Vietnamese.


It was an unexpected, but pleasant turn to the night.

When we arrived, it was a dark lane that Steph dared not to follow. I took the chance and went up the stairs that definately did not have any planned safety on them, and almost fell off them. But tonight was not going to be the night where I would be prevented from getting a drink. And as dinghy as it looked on the outside, when we got inside, it was a refreshing French inspired atmosphere which had Steph doing Karaeoke to the French tunes that were playing.

I ordered the coconut drink which was amazing, and Steph got the fruit juice. This would be the precursor to our evening meal and would also give us time to plan the next few days around Vietnam, whilst living off the cuff.

Just across the road was a local corner food place where I would finally get access to the rice meal that I had been in search for 7 hours earlier. Beef fried rice would be hailed as the holy grail for me tonight, whilst Steph would enjoy the dried beef noodles. As we reflected on the day whilst lapping up the last bits of our meal, we smiled, nodded, and headed back to the hotel for the night to look forward to the next days adventure. Short, sweet, lively and vibrant. Well done Hanoi. Well done Vietnam! 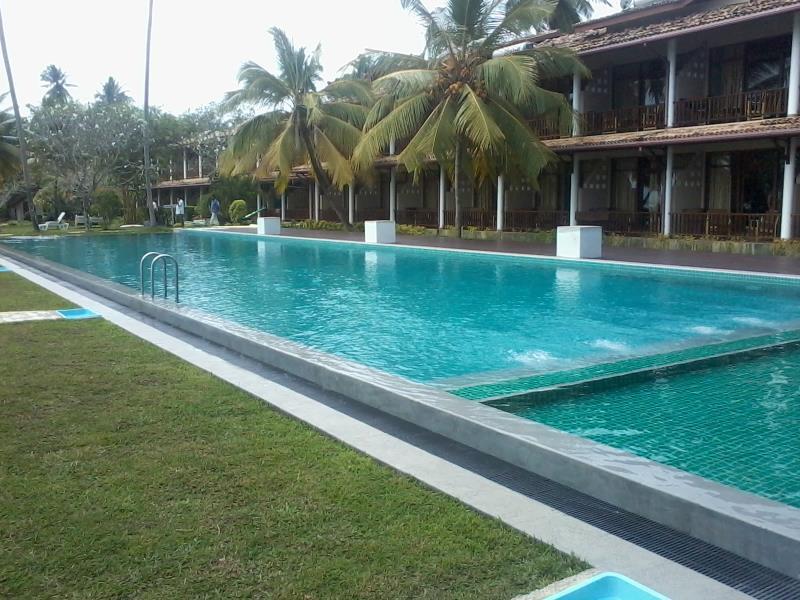 The Paradise Beach club was the best value for money hotel experience that we had. We had booked directly through the hotel, but you can… 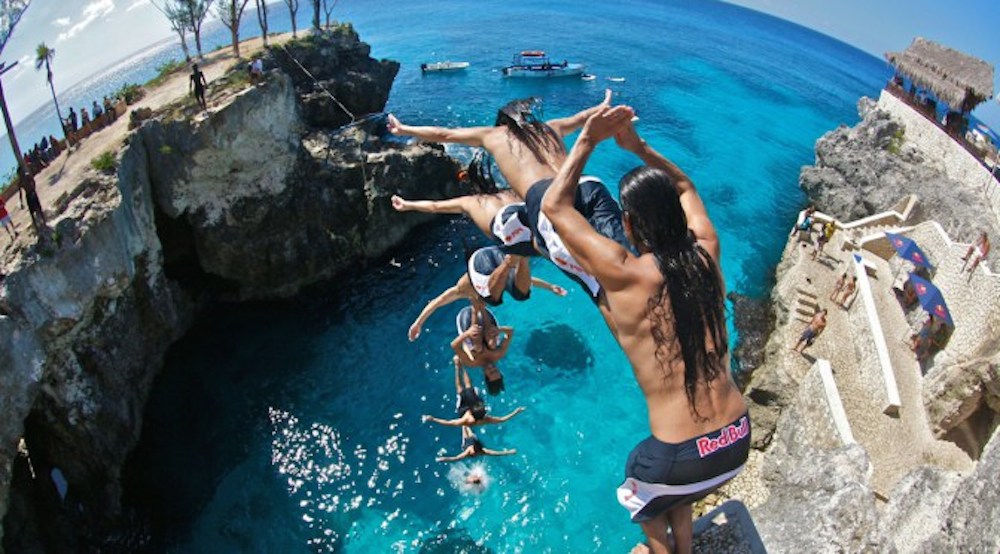 Ever thought about how to jam in Jamaica like a local, off the beaten track or to do something completely mindblowing. Break out of your… 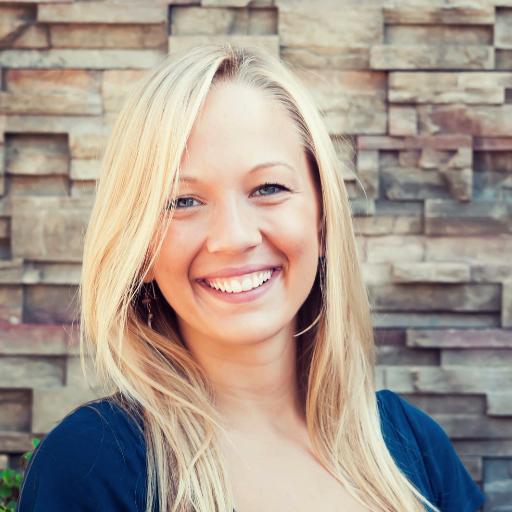 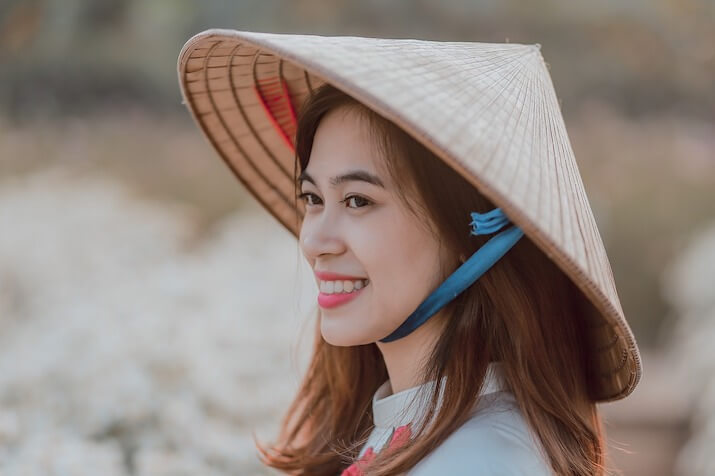 Vietnam is an amazing country to explore. There are several digital nomads such as Jodi Ettenberg from Legal Nomads, who has expressed her admiration for… 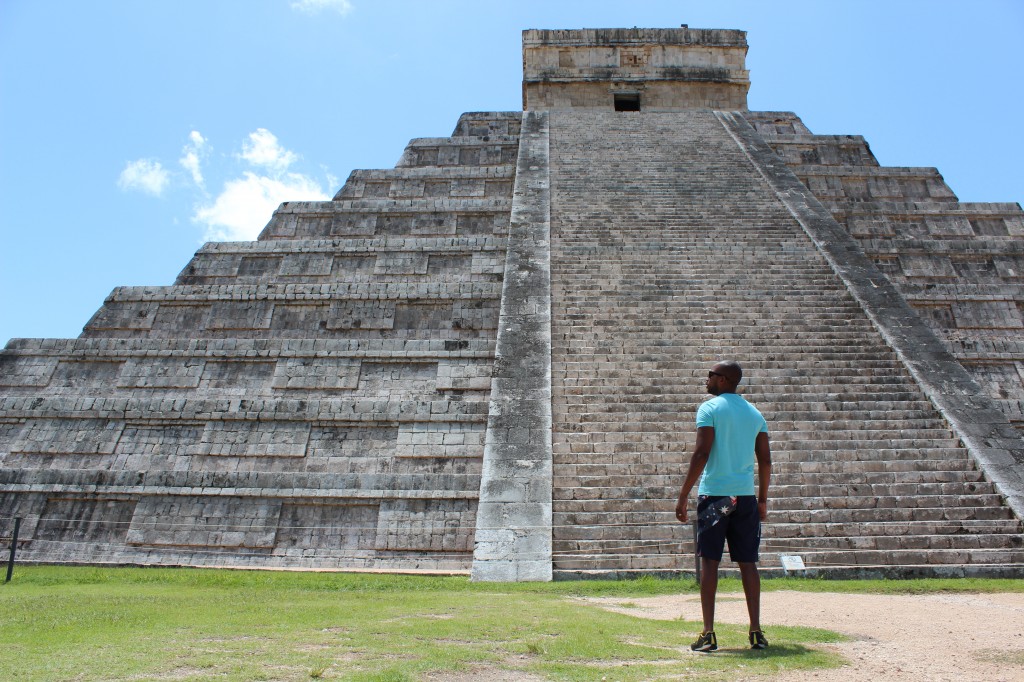 When my wife and I went on our honeymoon to Mexico, one of the places that we planned to visit was Chichen Itza in Mexico.… 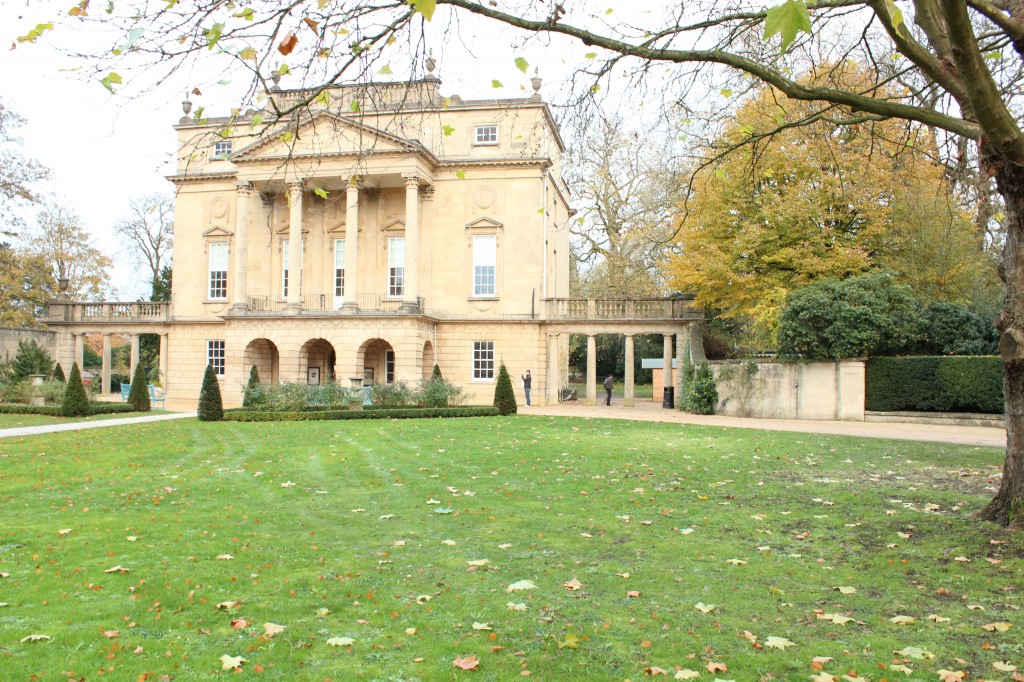 Steph and I escaped London for a quick romantic city break the city of Bath in the United Kingdom. Bath was one of the earliest…